It is a member of the group of the autoimmune spondyloarthropathies with a probable genetic predisposition. Complete fusion results in a complete rigidity of the spine, a condition known as bamboo spine.

The typical patient is young, of 15 to 30 years of age, with chronic pain and stiffness in the lower part of the spine.

Men are affected more than women by a ratio in excess of 2:1.[2] In 40% of cases, ankylosing spondylitis is associated with iridocyclitis causing eye pain and photophobia (increased sensitivity to light).

Other common symptoms are recurring mouth ulcers (aphthae) and fatigue. Pain can fluctuate from one side to the other.

AS is also associated with ulcerative colitis, Crohn's disease, psoriasis, and Reiter's disease.

There is no direct test to diagnose AS. A clinical examination and X-ray studies of the spine, which show characteristic spinal changes and sacroiliitis, are the major diagnostic tools.

A drawback of X-ray diagnosis is that signs and symptoms of AS have usually been established as long as 8-10 years prior to X-ray-evident changes occurring on a plain film X-ray, which means a delay of as long as 10 years before adequate therapies can be introduced.

Options for more accurate (and much earlier) diagnosis are tomography and magnetic resonance imaging of the sacroiliac joints.

The Schober's test is a useful clinical measure of flexion of the lumbar spine performed during examination.

Variations of the HLA-B gene increase the risk of developing ankylosing spondylitis, although it is not a diagnostic test.

Those with the HLA-B27 variant are at a higher risk than the general population of developing the disorder. HLA-B27, demonstrated in a blood test, is occasionally used as a diagnostic but does not distinguish AS from other diseases and is therefore not of real diagnostic value.

Over 95% of people that have been diagnosed with AS are HLA-B27 positive, although this ratio varies from population to population, (only 50% of African American patients with AS possess HLA-B27, and it is close to 80% among AS patients from Mediterranean countries).

In 2007, a collaborative effort by an international team of researchers in the U.K., Australia and the United States led to the discovery of two genes, ARTS1 and IL23R, that also cause AS.

The findings were published in the November 2007 edition of Nature Genetics, a journal that emphasizes research on the genetic basis for common and complex diseases.

Together with HLA-B27, these two genes account for roughly 70 percent of the overall incidence of the disease.

The BASDA can help to establish a diagnosis of AS in the presence of other factors such as HLA-B27 positivity, persistent buttock pain which resolves with exercise, and X-ray or MRI evident involvement of the sacroiliac joints. (See: "Diagnostic Tools", below) It can be easily calculated and accurately assesses a patient's need for additional therapy; a patient with a score of 4 out of a possible 10 points while on adequate NSAID therapy is usually considered a good candidate for biologic therapy.

The Bath Ankylosing Spondylitis Functional Index (BASFI) is a functional index which can accurately assess a patient's functional impairment due to the disease as well as improvements following therapy. (See: "Diagnostic Tools", below) The BASFI is not usually used as a diagnostic tool but rather as a tool to establish a patient's current baseline and subsequent response to therapy.

AS is a systemic rheumatic disease and is one of the seronegative spondyloarthropathies. About 90% of the patients express the HLA-B27 genotype. Tumor necrosis factor-alpha (TNF α) and IL-1 are also implicated in ankylosing spondylitis. Although specific autoantibodies cannot be detected, its response to immunosuppresive medication has prompted its classification as an autoimmune disease.

Hypotheses on its pathogenesis include a cross-reaction with antigens of the Klebsiella bacterial strain (Tiwana et al. 2001). Particular authorities argue that elimination of the prime nutrients of Klebsiella (starches) would decrease antigenemia and improve the musculoskeletal symptoms. On the other hand, Khan (2002) argues that the evidence for a correlation between Klebsiella and AS is circumstantial so far, and that the efficacy of low-starch diets has not yet been scientifically evaluated. Similarly, Toivanen (1999) found no support for the role of klebsiella in the etiology of primary AS.

The sex ratio is 3:1 for men:women, the prevalence is 0.25%, but as it is a chronic condition the incidence (number of new cases) is fairly low.

Many rheumatologists believe the number of women with AS is underdiagnosed, as women tend to manifest symptoms in their lower spinal area (lumbar, sacrum, hips, pelvis) instead of their shoulders/upper chest/neck (where the first symptoms appear in male patients). 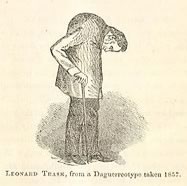 It has been suggest that AS was first recognized as a disease which was different from rheumatoid arthritis by Galen as early as the second century A.D; however, skeletal evidence of the disease (ossification of joints and entheses primarily of the axial skeleton, known as "bamboo spine") was first discovered in an archaeological dig that unearthed the skeletal remains of a 5000-year–old Egyptian mummy with evidence of "bamboo spine".

The anatomist and surgeon Realdo Colombo described what could have been the disease in 1559, and the first account of pathologic changes to the skeleton possibly associated with AS was published in 1691 by Bernard Connor In 1818, Benjamin Brodie became the first physician to document that a patient believed to have active AS had accompanying iritis In 1858, David Tucker published a small booklet which clearly described a patient by the name of Leonard Trask who suffered from severe spinal deformity subsequent to AS.

In 1833 Trask fell from a horse, exacerbating the condition and resulting in severe deformity. Tucker reported:

"It was not until he [Trask] had exercised for some time that he could perform any labor [..., and that] his neck and back have continued to curve drawing his head downward on his breast."

This account became the first documented case of AS in the United States, since its indisputable description of inflammatory disease characteristics of AS, and the hallmark of deforming injury in AS.

It was not until the late nineteenth century (1893-1898), however, when the neurophysiologist Vladimir Bekhterevof Russia in 1893,Adolph Strümpell of Germany in 1897, and Pierre Marie of France in 1898, were the first to give adequate descriptions which permitted an accurate diagnosis of AS prior to severe spinal deformity.

For this reason, AS is also known as Bechterew Disease or Marie–Strümpel Disease.

AS can range from mild to progressively debilitating and from medically controlled to refractive.

Unattended cases of AS normally lead to knee pain and may be accompanied by dactylitis or enthesitis, which may result in a misdiagnosis of normal rheumatism.

In a long-term undiagnosed period, osteopenia or osteoporosis of the AP spine may occur, causing eventual compression fractures and a back "hump" if untreated.

Typical signs of progressed AS are the visible formation of syndesmophytes on X-rays and abnormal bone outgrowths similar to osteophytes affecting the spine.

The fusion of the vertebrae paresthesia is a complication due to the inflammation of the tissue surrounding nerves.

Organs commonly affected by AS, other than the axial spine and other joints, are the heart, lungs, colon, and kidney.

No cure is known for AS, although treatments and medications are available to reduce symptoms and pain.

Physical therapy and exercise, along with medication, are at the heart of therapy for ankylosing spondylitis.

Physiotherapy and physical exercises are clearly to be preceded by medical treatment in order to reduce the inflammation and pain and are commonly followed by a physician.

This way the movements will help in diminishing pain and stiffness, while exercise in an active inflammatory state will just make the pain worse.

Medical professionals and experts in AS have widely speculated that maintaining good posture can reduce the likelihood of a fused or curved spine which occurs in a significant percentage of diagnosed persons.

There are three major types of medications used to treat ankylosing spondylitis.

Anti-inflammatory drugs, which include NSAIDs such as aspirin, ibuprofen, indometacin, naproxen and COX-2 inhibitors, which reduce inflammation, and consequently pain.

These drugs tend to have a personal response to the pain and inflammation, although commonly used anti-inflammatory drugs like nimesulide are less effective than others.

Opioid analgesics have also been proven by clinical evidence to be very effective in alleviating the type of chronic pain commonly experienced by those suffering from AS, especially in low dose time-release formulations. While NSAIDs should generally be tried first, the use of opioid analgesics either apart from or in concert with NSAIDs should not be summarily dismissed for fear of addiction, as studies have shown that patients who properly take opioid analgesics for pain rarely suffer from addiction as a result of using such opioid therapy for pain relief purposes.

Disease-modifying antirheumatic drugs (DMARDs)such as cyclosporin, methotrexate, sulfasalazine, and corticosteroids, used to reduce the immune system response through immunosuppression; Tumor necrosis factor-alpha (TNF&alpha) blockers (antagonists) such as etanercept, infliximab and adalimumab (also known as biologics), are indicated for the treatment of and are effective immunosuppressants in AS as in other autoimmune diseases; Tumor necrosis factor-alpha (TNF&alpha) blockers have been shown to be the most promising treatment, slowing the progress of AS in the majority of clinical cases.

They have also been shown to be highly effective in treating not only the arthritis of the joints but also the spinal arthritis associated with AS.

A drawback is the fact that these drugs increase the risk of infections. For this reason, the protocol for any of the TNF-α blockers include a test for tuberculosis (like Mantoux or Heaf) before starting treatment. In case of recurrent infections, even recurrent sore throats, the therapy may be suspended because of the involved immunosuppression.

In severe cases of AS, surgery can be an option in the form of joint replacements, particularly in the knees and hips. Surgical correction is also possible for those with severe flexion deformities (severe downward curvature) of the spine, particularly in the neck, although this procedure is considered risky.

In addition, AS can have some manifestations which make anaesthesia more complex.

Changes in the upper airway can lead to difficulties in intubating the airway, spinal and epidural anaesthesia may be difficult owing to calicification of ligaments, and a small number have aortic regurgitation. The stiffness of the thoracic ribs results in ventilation being mainly diaphragm-driven, so there may be a decrease in pulmonary function.

All physical therapies must be approved in advance by a rheumatologist, since movements that normally have great benefits to one's health may harm a patient with AS; massages and physical manipulations should be practiced by therapists familiar with this disease. Some of the therapies that have been shown to benefit AS patients include:

Moderate-to-high impact exercises including jogging are generally not recommended or recommended with restrictions due to the jarring of affected vertabrae that can worsen pain and stiffness in some patients.

The majority of patients with AS exhibit the HLA-B27 antigen and high levels of immunoglobulin A (IgA) in the blood. The HLA-B27 antigen is also expressed by Klebsiella bacteria, which is found in high levels in the faeces of AS patients. A theory suggests that the presence of the bacteria may be a trigger of the disease, and reducing the amount of starch in the diet (which the bacteria require to grow) may be of benefit to AS patients.

A test of this diet resulted in reduced symptoms and inflammation in patients with AS as well as IgA levels in individuals with and without AS.

You are invited to visit Gold Coast chiropractor and osteopath, Dr Peter Pedersen for evaluation of your back pain to see if you would benefit from adjustments, massage, physiotherapy or FSM. Chiropractic or osteopathy may help reduce pain in some cases if inflammation is controlled. At Nerang Chiropractic we perform a thorough examination of your spine, which may include xrays, and you are assured that no treatment will commence until we have discussed all treatment options.

Your Health Matters Group Practice - since 1980 - 63 Warrener Street Nerang / corner of Broadbeach-Nerang Road. Exit 71 on the Eastern side of the M1